Shiba inu, the self-proclaimed dogecoin killer, may still have its passionate following but it was in the red again Wednesday, following three consecutive weeks of losses.

The loss followed profit-taking by large SHIB token holders, as the crypto market moved to a risk-off mode, a situation when traders reduce their exposure to riskier assets, according to blockchain data.

Crypto markets are currently in a risk-off mode following the new highs made by bitcoin and ether [about] two weeks back, blockchain analytics firm Nansen said in a written response to CoinDesk, adding that it’s natural to see higher beta assets like SHIB to dip in price as investors de-risk.

According to Nansen, an increasing number of wallets with significant holdings have been reducing their SHIB positions recently, possibly due to profit-taking.

Data from blockchain data firm Santiment shows similar trends. So-called whale transaction counts, or the number of SHIB transactions valued more than $100,000, have been rising since the beginning of November. Active deposits, or the amount of daily unique addresses to deposit SHIB to centralized exchanges, have also been increasing. 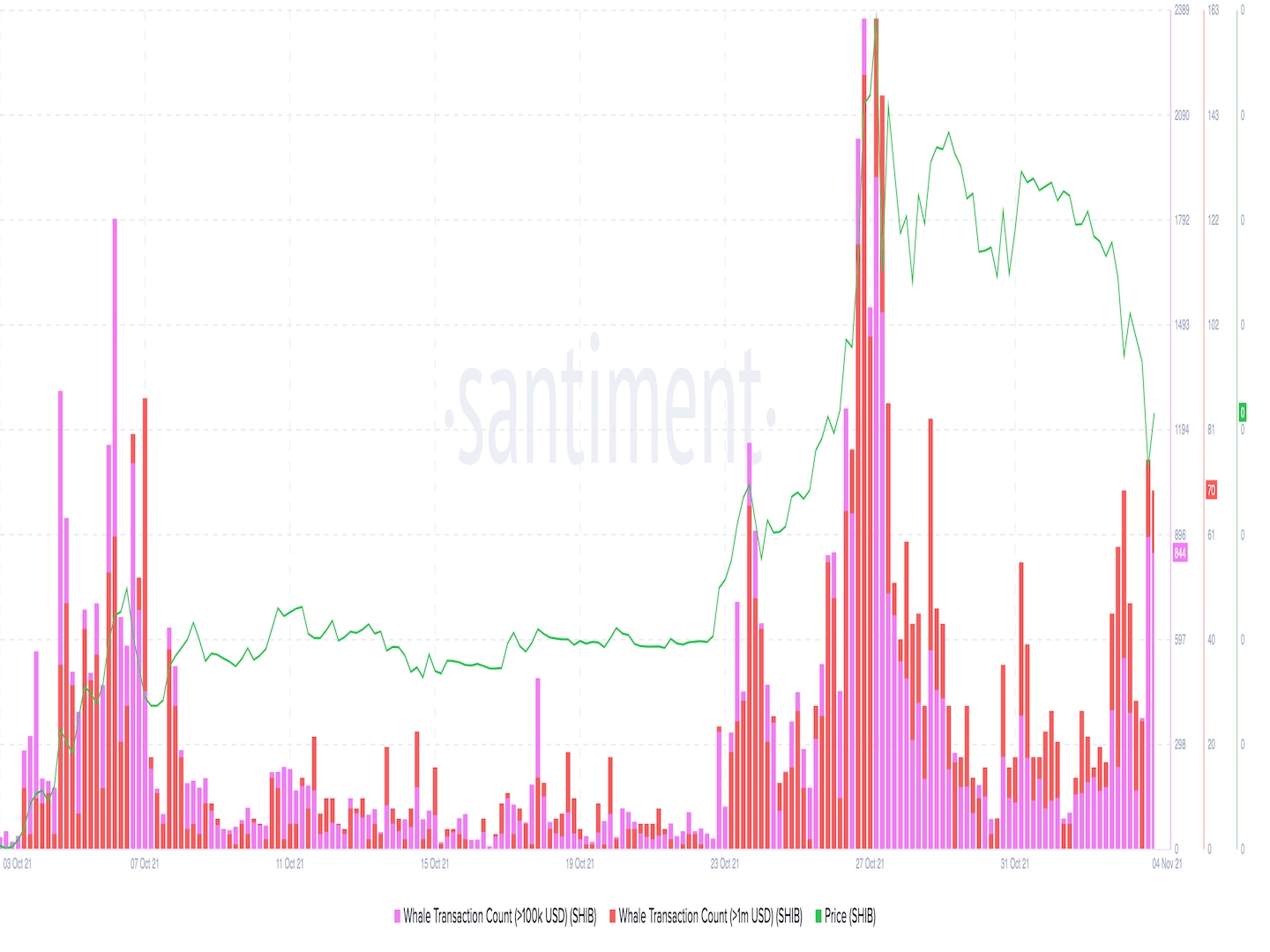 A spike in the active deposit metric may indicate a rise in short-term sell pressure for the token, according to Santiment’s metric explainer.

Like any asset, SHIB price is the product of supply and demand … a larger percentage of SHIB buyers were evidently attracted by its speculative appeal alone, Rick Delaney, a senior analyst at OKEx Insights, said. Drawn by the asset’s rising price, many SHIB investors simply do not have the long-term conviction needed to hold their positions or to reenter the market while the price is dropping.

While SHIB was once the most traded token on centralized exchanges, its trading volume has dropped significantly, as CoinGecko’s data shows.

Nansen said that trading volume is among the most important metrics for SHIB and other meme tokens because a drop in trading volume shows that investors start to lose interest and become more cautious of putting money in the meme-themed tokens.

The most traded alternative cryptocurrencies (altcoins) on centralized exchanges now are gaming-related tokens, including decentraland (MANA) and the sandbox (SAND), according to CoinGecko.

SHIB’s price fall can be mostly attributed to the recent shift in investors’ interest from meme tokens to metaverse projects, crypto price-tracking site CoinMarektCap wrote in a response to CoinDesk. That can easily be seen by comparing the trading volume of MANA, SAND and SHIB.

Trading volume is always related to investors’ interest in a project, it added.

Social media buzz around the canine-themed coin has also sunk dramatically. At the time of publication, Google Trends, a widely used tool to gauge retail interest in trending topics, showed a value of 22 for the search query SHIB globally, down from a peak at 100 at the end of October.

A score of 100 represents peak popularity – the maximum number of searches observed for a term during a given time. A value of 22 means fewer people are scanning the web for information on SHIB.

Despite declining social media buzz around the meme token, retail investors’ interest in SHIB remains strong as the number of unique addresses holding SHIB continues to increase – good news for the SHIBArmy.

The number of unique addresses holding SHIB surpassed one million on Nov. 11 – a time when SHIB’s prices were already dropping, according to Nansen data.

Retail interest is definitely there still, as people take speculative bets, Daniel Khoo, research analyst at Nansen, said. [No one] wants to miss out on getting rich.