Crypto prices were crushed this past week and when such events happen, many seek out a culprit.

We’ve been noting that demand for bitcoin and ether was drying up (Of course, this doesn’t mean muted markets can last forever, but in the coming days or weeks, one shouldn’t be surprised if prices drift south, I warned in last week’s column). That answered the question what? but not why?

One persistent, common myth about crypto may seem perfectly reasonable but doesn’t hold up when the data is analyzed. That myth is that cryptocurrencies trade closely with tech stocks and certainly more so than with the overall market.

With a selloff in tech giants coinciding with bitcoin’s plunge this past week, this theory is gaining traction.

At first blush, there’s a lot of reasons why that would make sense. Buying cryptocurrencies – not just bitcoin, but any of them – is a bet that the technology will be adopted by more users. Something that is the future of money (and art and data management and .) that has fewer than 40 million non-zero balances as bitcoin does will only go up from there, since the world’s population is 198 times that amount, the thinking goes.

Thus, one would expect the new technology narrative to far outweigh the inflation hedge narrative, which is an integral part of bitcoin’s origin story. Yet is that really the case?

The data says . not exactly.

The favored proxy for the tech sector, the Nasdaq 100, is packed with giants in the space: Apple, Microsoft, Amazon, Meta (aka Facebook), Tesla and Alphabet (aka Google), which accounted for 43% of the index’s value as of Dec. 31. And while there are other sectors like consumer services or healthcare, even those are tech-heavy. Activision Blizzard, Electronic Arts and Netflix are categorized as communication services, for example. 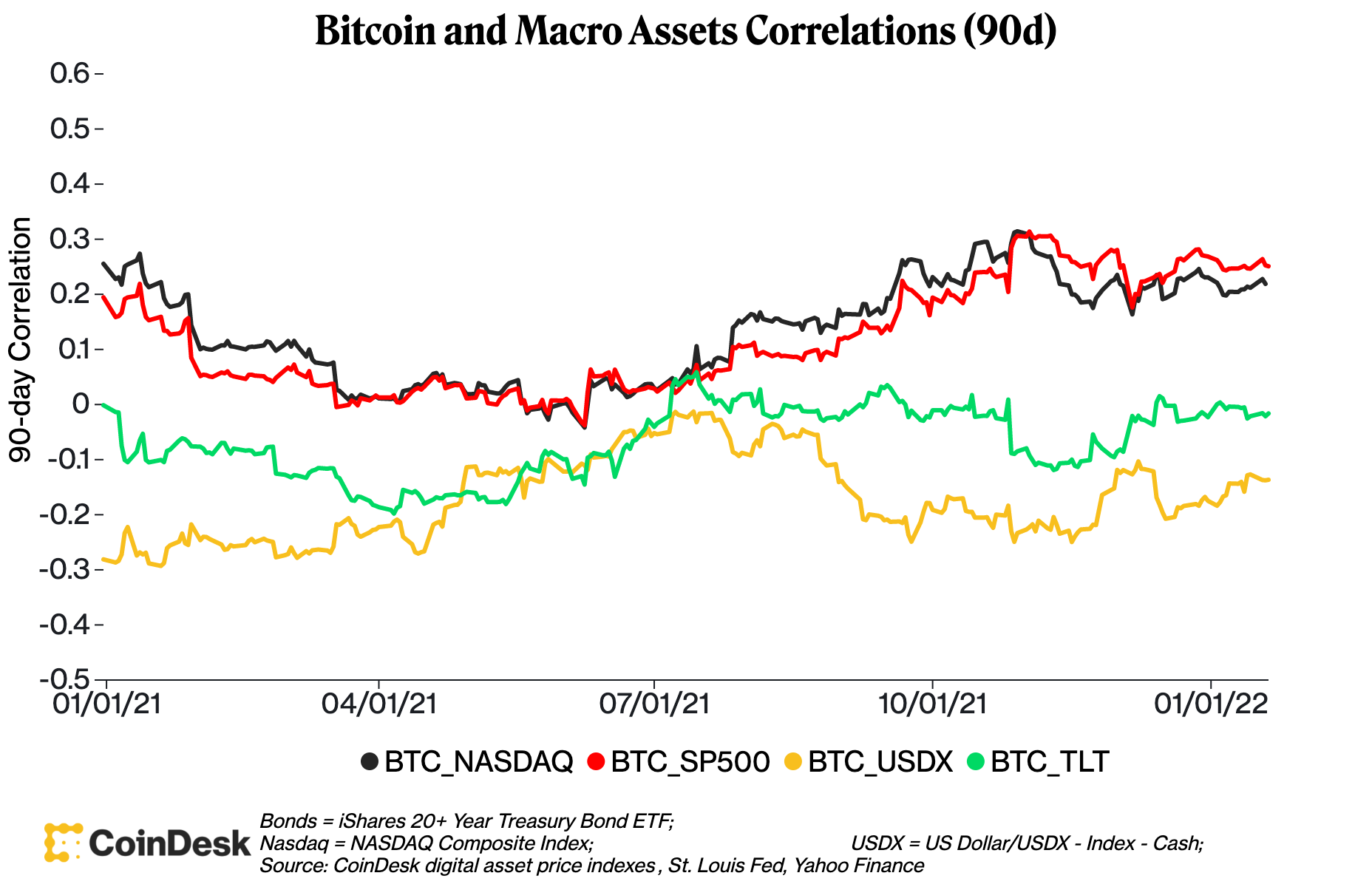 Using bitcoin as a proxy for crypto overall – not perfect, but bear with me – we see the correlation coefficient between the largest cryptocurrency by market cap and the Nasdaq Composite (using a 90-day set) is 0.22. That’s positive, but weak.

Yet the narrative of bitcoin offsetting the devaluing dollar is even weaker than the one about it being a tech-related investment. The correlation coefficient between bitcoin and the U.S. Dollar Index is just -0.13. Against U.S. bonds, represented by the iShares 20+ Year Treasury Bond ETF (TLT), it is just -0.02. In other words, no relationship at all.

All this is to say that there are likely other factors that can explain the current state of the crypto markets. For example, given the major moves in the past year have all tied with regulatory action in China, it’s hard not to see the connection between those events and bitcoin’s price path.

For the time being at least, one could say bitcoin’s prices are a combination of some global risk appetite and a lot of the market dynamics in China (and the aftermath of restrictions there). Those factors’ influences aren’t static, but they explain a lot more than watching the Fed’s every move.