Hi, Market Wrap readers! During the final two weeks of 2021, we’re using this space to recap the year’s most dramatic moments in cryptocurrency markets – and highlight key lessons from this fast-evolving corner of global finance. Over a series of eight posts that started on Dec. 20 and ends today, we recapped what shook crypto markets this year. (Please scroll down for today’s crypto prices and the latest headlines.)

On Wednesday, we walked through the events leading up to bitcoin’s rise from $30,000 to $50,000. El Salvador’s decision to adopt BTC as legal tender appeared to have been priced in from June, and buyers started to take some profits when the Central American country’s law went into effect in September. During that time, bitcoin and stocks began to fall as concerns about China’s property debt risk lingered.

But the September dip didn’t last long. The market got a fresh jolt of enthusiasm when the first U.S. bitcoin exchange-traded fund – a bitcoin futures ETF, that is – launched in the fourth quarter. Bitcoin climbed from $40,000 toward $65,000 in October, spurring visions of $100,000 by the end of the year. It was not to be: The rally fizzled, bitcoin’s notorious volatility returned, and the six-figure price prediction proved wildly optimistic.

After months of delays, U.S. Securities and Exchange Commission (SEC) Chairman Gary Gensler announced in August his preference for a bitcoin futures-based exchange-traded fund. Traders became hopeful that the SEC would approve a bitcoin-linked ETF in October.

Lurking behind those hopes was the belief that many investors in traditional markets wanted to bet on bitcoin but lacked the technological setup or know-how to do so; an ETF would let them buy into bitcoin with the ease of buying a stock in an online brokerage account.

For years, crypto industry executives had speculated that the SEC’s approval of a bitcoin ETF – denied multiple times under former SEC Chairman Jay Clayton – might finally bring about the perceived holy grail of institutional adoption of the cryptocurrency.

But not all bitcoin-related ETFs are created the same: A bitcoin futures ETF is backed by futures contracts such as those traded on the Chicago Mercantile Exchange. A bitcoin spot ETF, by contrast, is one backed directly by the cryptocurrency.

I think his comments are pretty clear that a pure spot bitcoin ETF isn’t coming soon and that futures products would potentially be considered, Steven McClurg, chief investment officer for Valkyrie, told CoinDesk at the time.

Experts on the topic warned that a bitcoin futures ETF would be subject to disadvantages, most notably the existence of a phenomenon known as contango bleed or roll costs that would eat into investor returns.

Even so, some analysts predicted that the mere approval of a bitcoin ETF, whether spot or futures-based, would make crypto more accessible to traditional investors and thereby boost overall market sentiment.

And on Oct. 19, the ProShares Bitcoin Strategy exchange-traded fund (NYSE: BITO), the first bitcoin futures-related ETF to trade in the U.S., went live. 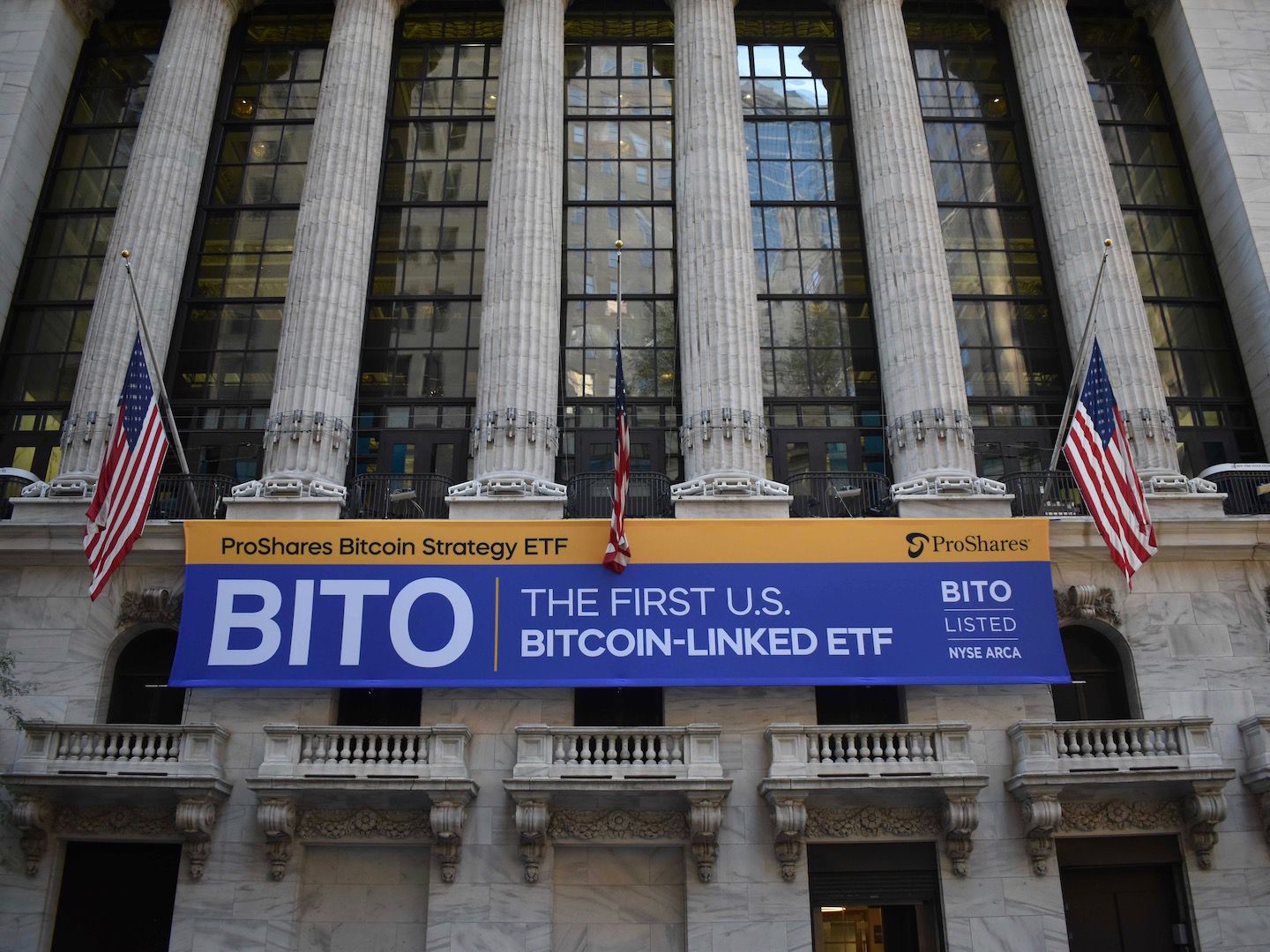 Dave Nadig, chief investment officer and director of research of ETF Trends, said that much of the volume on BITO’s first trading day appeared to come from retail investors, because there were few large block trades of the size that big institutional traders often deal in.

This is probably going to be what we all expected, which is it’s an access vehicle for certain players in the marketplace, Nadig said in a phone interview with CoinDesk at the time. There’s lots of folks who are active participants in the markets who just don’t want to cross over the crypto bridge by themselves.

But with bitcoin already up about 40% in the first two weeks of October, some analysts began to question whether the BITO ETF was another buy-the-rumor, sell-the-fact event.

Look, we’re up 40% this month, which is only 15 days old, a pause that refreshes, Mark Yusko, CEO and chief investment officer of Morgan Creek Capital Management, said during a CNBC interview on Oct. 17. Given how overbought we are right now, Yusko said, a fresh sell-off wouldn’t surprise me.

Crypto bulls weren’t done yet. In the days following BITO’s trading debut, bitcoin continued upward to hit an all-time price high of around $69,000. Several alternative cryptocurrencies (altcoins) joined the rally. Ether, the second-largest cryptocurrency by market capitalization, rose above $4,000 for the first time since mid-May.

But as November set in, buyers failed to sustain new highs. Bitcoin began a descent below $60,000 as heavily leveraged traders began to liquidate their positions. Some indicators such as the crypto Fear & Greed Index showed the market in extreme greed territory, which typically precedes price drops, as shown in the chart below. 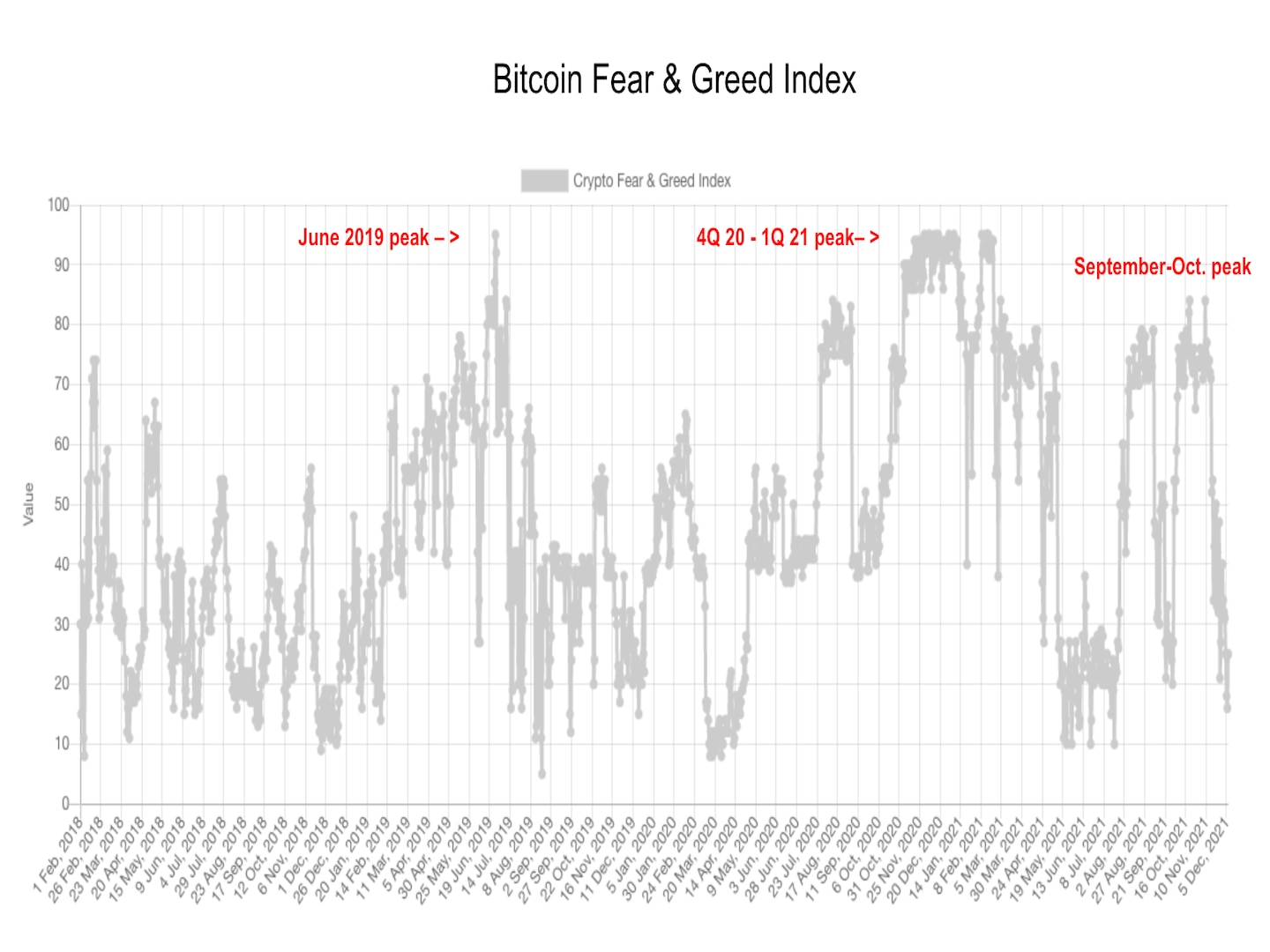 After many volatile price swings this year, bitcoin eventually stabilized just below $50,000 as of late December.

Optimistic price calls made earlier in the year, such as a prediction for $100,000 BTC by the end of year, now look quaint, especially with bullish sentiment deteriorating over the past month.

Some analysts remain hopeful of a short-term price bounce going into the new year, similar to what happened the last time around.

At the very least, crypto investors can probably expect another volatile ride in 2022.

Here are the biggest gainers and losers among the CoinDesk 20 digital assets, over the past 24 hours.