Cryptocurrencies are starting to stabilize after declining sharply over the past week. Some indicators show investor sentiment at extremely bearish levels, which typically precede periods of buying activity. Other technical measures, however, suggest choppy price action could persist over the short term.

Bitcoin returned to above $35,000 and was up 3% over the past 24 hours, versus a 5% decline in SOL and roughly flat performance in ETH over the same period.

Still, it might be too soon to call a price bottom. “I think the determination of a bull/bear market is not as clear as previous cycles, due to the structure of the market changing drastically with institutions entering the space,” Marcus Sotiriou, an analyst at the U.K.-based digital asset broker GlobalBlock, wrote in an email to CoinDesk.

“Now, it is apparent that bitcoin is in a ranging environment (between $29,000 to $69,000 approximately) rather than a trending environment,” Sotiriou wrote.

“Bitcoin’s recovery is a long shot as investors are more keen on the price being stabilized for now,” Alex Axelrod, founder and CEO of Aximetria, a crypto financial services firm, wrote in an email to CoinDesk. Axelrod is monitoring BTC price levels of between $32,000 and $40,000 for confirmation of a breakdown or breakout.

The chart below shows the recent increase in bitcoin’s spot trading volume. Short-term traders have been active despite the uncertainty regarding future price direction. Losses are adding up for most short-term bitcoin holders, according to blockchain data.

The chart below indicates that 18% of short-term bitcoin holder supply is at a loss (BTC trading below its average cost basis), which could point to further selling. A similar scenario occurred during the 2018 bear market and subsequent price corrections.

Still, long-term bitcoin holders appear unfazed by the recent price dip. “The proportion of long-term holder supply has actually returned to a modest uptrend, which indicates a general unwillingness for this cohort to liquidate,” Glassnode, a crypto data firm, wrote in a blog post on Monday. 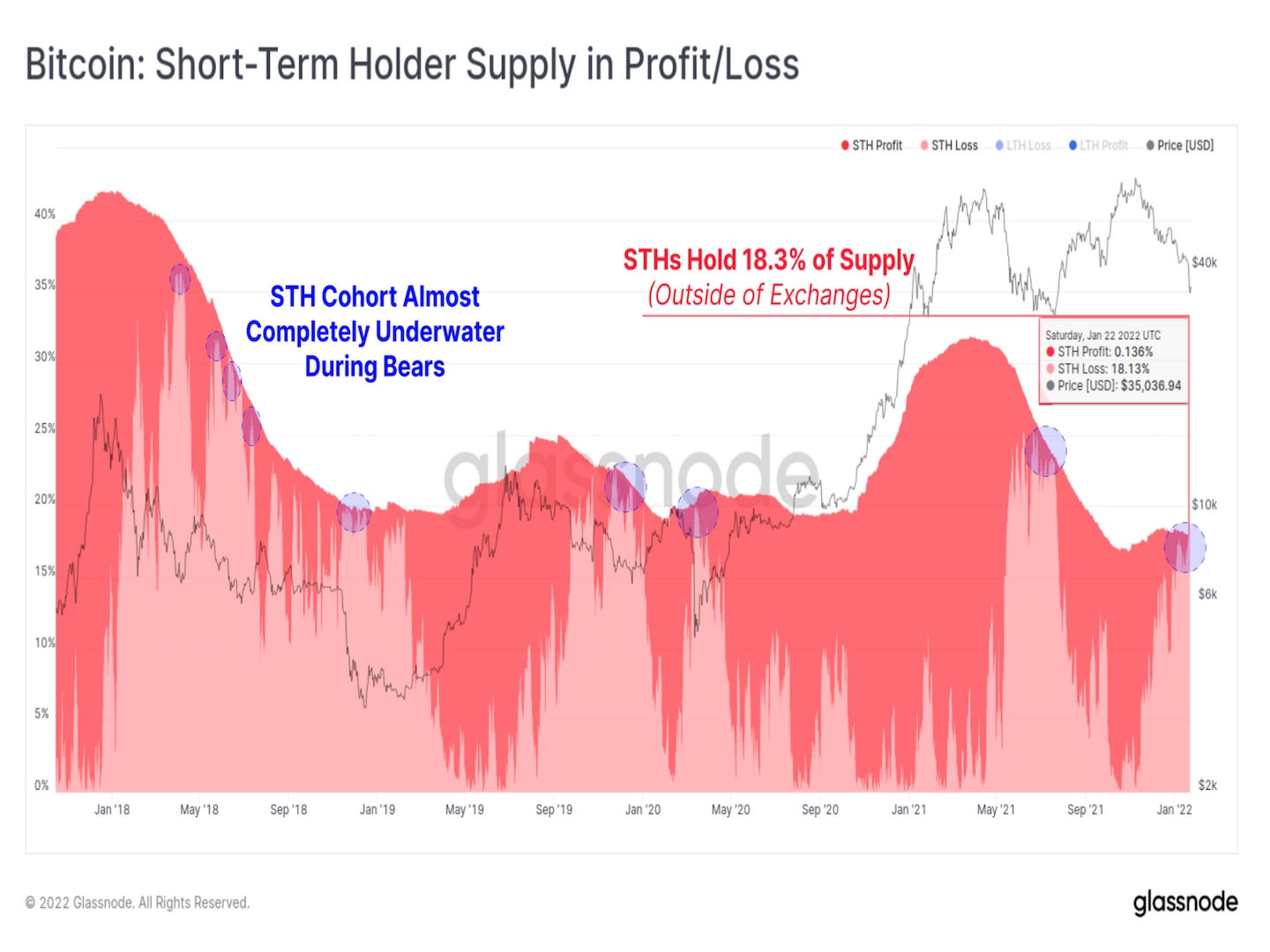 Cryptocurrency funds brought in $14.4 million of new investor money during the seven days through Friday, ending a streak of five straight weeks of outflows, according to a report Monday from the digital-asset manager CoinShares.

Most digital assets in the CoinDesk 20 ended the day lower.