Bitcoin’s price rose by as much as $1,834 on a four-hour basis during U.S. trading hours on Monday, after it briefly touched the $34,000 level during Asia’s late afternoon. The overall crypto market stabilized after the broad market correction downward in the past week.

Bitcoin is currently changing hands at around $36,400 and is up slightly in the past 24 hours, according to CoinDesk data. At the time of publication, ether was down slightly, trading at about $2,400. Most of the major alternative coins (altcoins) were in the red.

The U.S. equity market also rebounded in the late afternoon on Monday. Major stock indices tumbled earlier in the day as investors closely watch the Federal Reserve’s first meeting this year, which will take place this week.

For the time being at least, one could say bitcoin’s prices are a combination of some global risk appetite and a lot of the market dynamics in China (and the aftermath of restrictions there), CoinDesk’s Lawrence Lewitinn wrote. Those factors’ influences aren’t static, but they explain a lot more than watching the Fed’s every move. 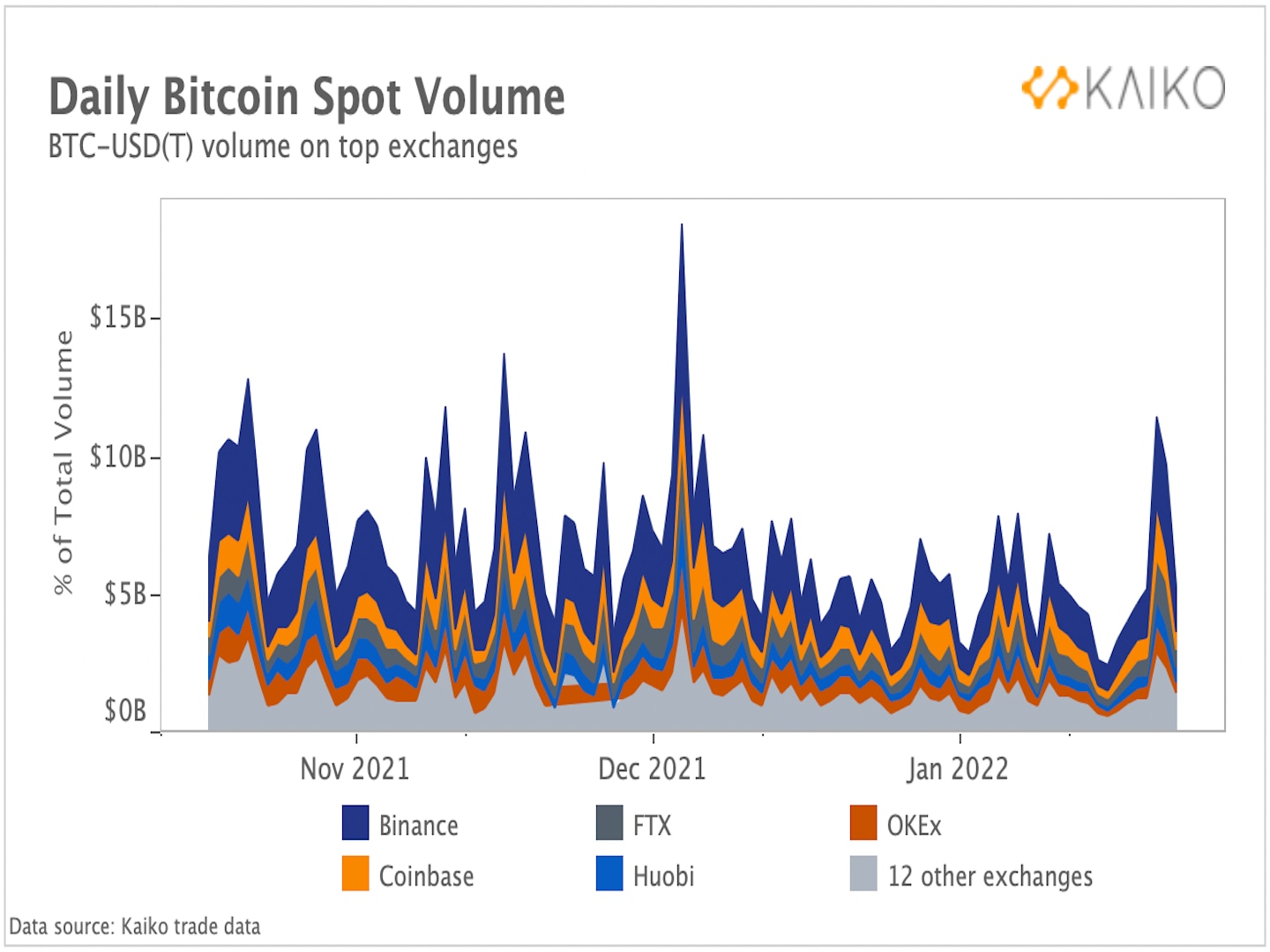 The average daily spot trading volume of bitcoin on major cryptocurrency exchanges has mostly remained below $5 billion in the past month, down significantly since early fall, Kaiko wrote in its weekly newsletter on Monday. This is partly because Chinese exchanges OKEx and Huobi have suffered volume loss due to the crypto trading ban in China last year. 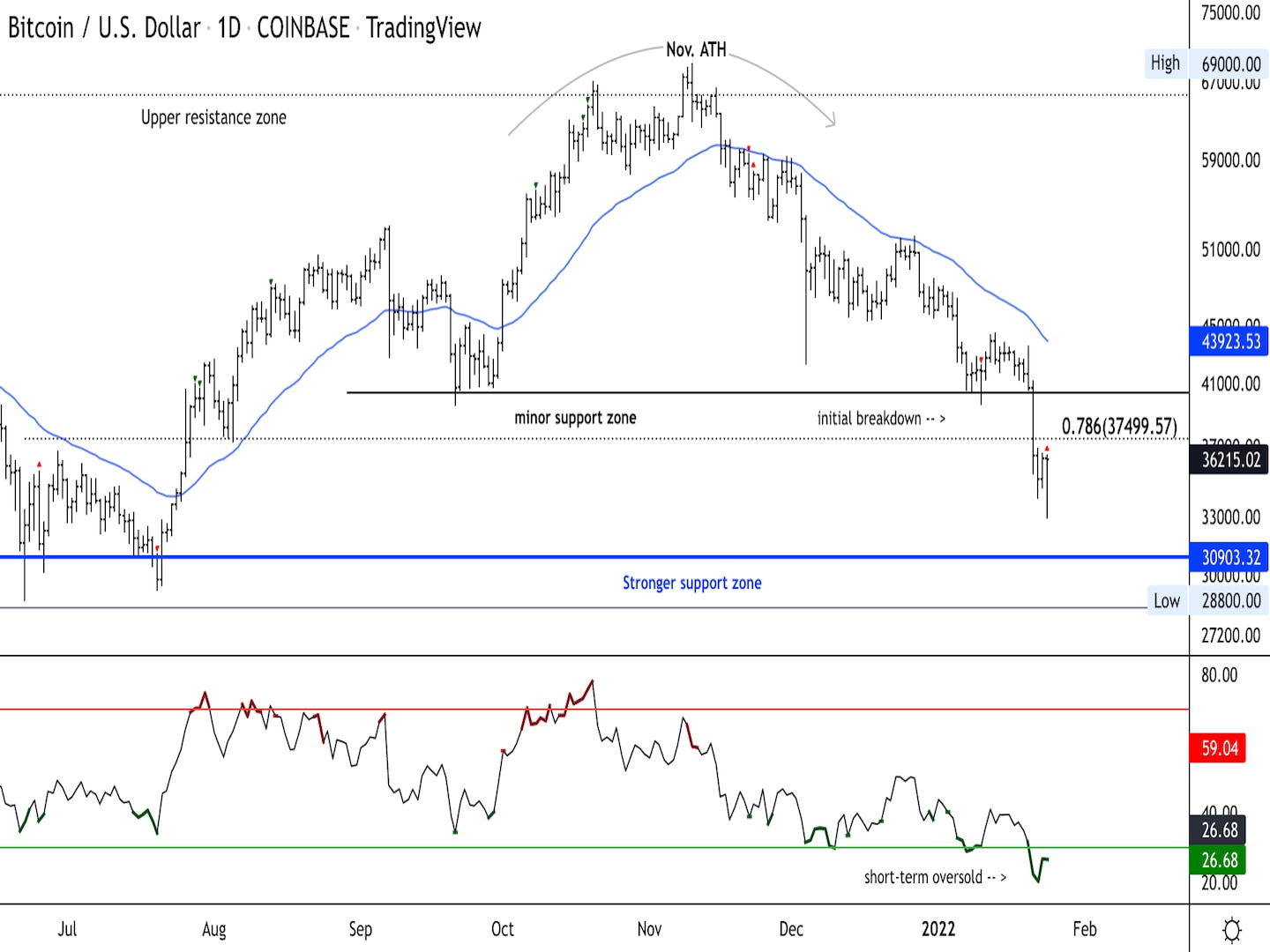 Bitcoin (BTC) returned above $35,000 after multiple oversold signals appeared on the charts. The cryptocurrency faces initial resistance at $40,000, which could limit upside over the short term.

Bitcoin is up 3% over the past 24 hours after rising from an intraday low near $33,000, while the broader crypto market has stabilized.

The relative strength index (RSI) on the daily chart registered the most extreme oversold reading since the March 2020 crash. The previous extreme low was on Nov. 20, 2018, which preceded a few months of rangebound price action before a rally took place.

For now, a downtrend of lower price highs since November remains intact, which means sellers could remain active at resistance levels.

In case you missed it, here is the most recent episode of “First Mover” on CoinDesk TV:

“First Mover” hosts were joined by Marc Lopresti, managing director at The Strategic Funds, for an in-depth analysis on the crypto markets as cryptocurrencies suffer yet another sell-off. Since November, about $1.3 trillion has been wiped out in the total market cap. Plus, what could we expect from the Biden administration’s digital asset strategy that’s reportedly set to release next month? Nyca Partners Executive-in-Residence Matt Homer and CoinDesk Managing Editor for Global Policy & Regulation Nikhilesh De provided their insights. Then CoinDesk Executive Editor Marc Hochstein explained Privacy Week at CoinDesk.

Singapore VC Blockchain Founders Raises $75M for New Fund: The company has been an early investor in blockchain, crypto, Web 3 and metaverse startups.

Biden Administration to Release Executive Order on Crypto as Early as February: Report: The directive will ask federal agencies to determine the risks and opportunities posed by digital assets.

Who Writes the Story of the Metaverse?: How narratives and memes shape our online future.

Other voices: Blockchain beyond the hype: What is the strategic business value?

“Surveillance economies power our biggest tech companies. Facebook and Google track our every step to deliver surgical ad strikes that make us hungry to buy more stuff we don’t need, with money we don’t have, to impress people we don’t even know. They track where we go, what we like, who we know and love, and with whom we’re sleeping.” (Author and speaker Daniel Jeffries writing for CoinDesk) … “Well, here’s another take – it’s a bad time to be a day trader, but it’s also a bad time for NFT flippers, whose gains and losses are typically priced in ETH. Even as the price has fallen, the average amount of ETH exchanged for non-fungible tokens in top collections has stayed relatively consistent.” (CoinDesk media and culture reporter Will Gottsegen) … “That is the promise of a virtual world: that you get to be anybody you want, unhampered by flesh, gravity, environment, expectations and economics – or maybe just the record you have created.” (Vanessa Friedman/The New York Times) …