Technician’s take: Some price-chart indicators show the potential for a short-term BTC bounce if support holds.

Bitcoin continued to trade in a narrowed range during U.S. trading hours on Tuesday, while ether reversed Monday’s loss, turning to green.

At the time of writing, bitcoin, the oldest cryptocurrency, was trading slightly above $46,000 little changed in the past 24 hours, according to data from TradingView and Coinbase.

Data from blockchain data firm Glassnode shows that with bitcoin’s little movement, short-term holders are bearing most of the pain, which creates increased sell-side pressure. 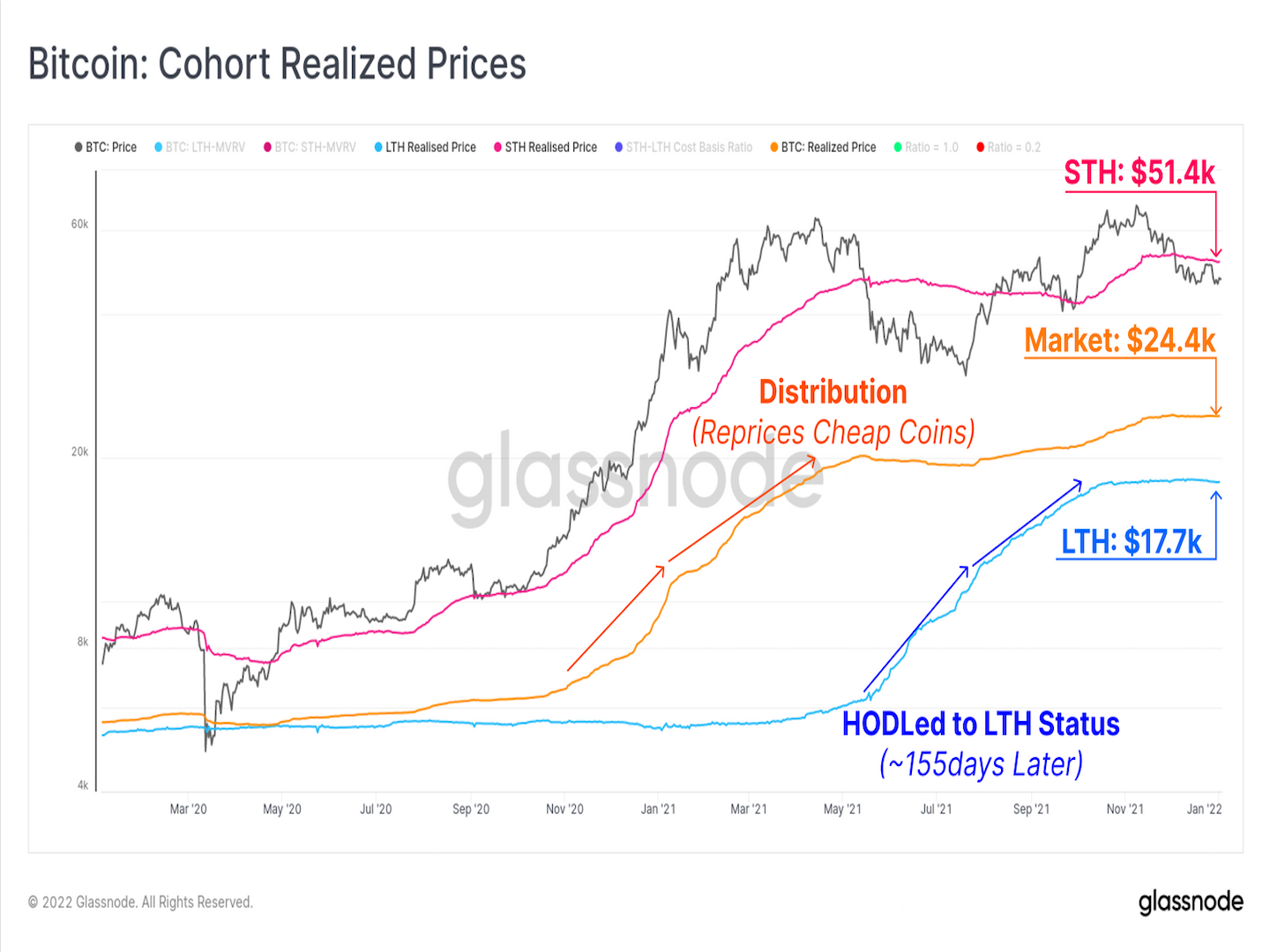 The realized price, a metric that values each bitcoin at the time when it was last spent on the blockchain, of bitcoin’s short-term holders was trading at roughly $51,400, according to Glassnode vs. $24,400 and $17,700 for the overall market and long-term holders, respectively.

Bitcoin’s short-term holders on aggregate [are] underwater on their investment, and are the most likely to create sell-side resistance, Glassnode wrote in its newsletter on Jan 3.

Ether, meanwhile, recovered some losses yesterday, moving above $3,800 at the time of writing, according to data from TradingView and Coinbase.

A few other layer 1 tokens also gained on Tuesday: Tokens of smart contract platforms such as Internet Computer, Cosmos, and Celo were among some of the biggest winners of the day, based on data from Messari.

The de-correlation of alternative cryptocurrencies (altcoins) with bitcoin’s price may also put further pressure on bitcoin’s price, according to an analyst.

The bull case remains for bitcoin, but it will be a much harder year as many traders will also focus on altcoins, Edward Moya, senior market analyst at OANDA, the Americas, wrote in his daily market update on Tuesday. 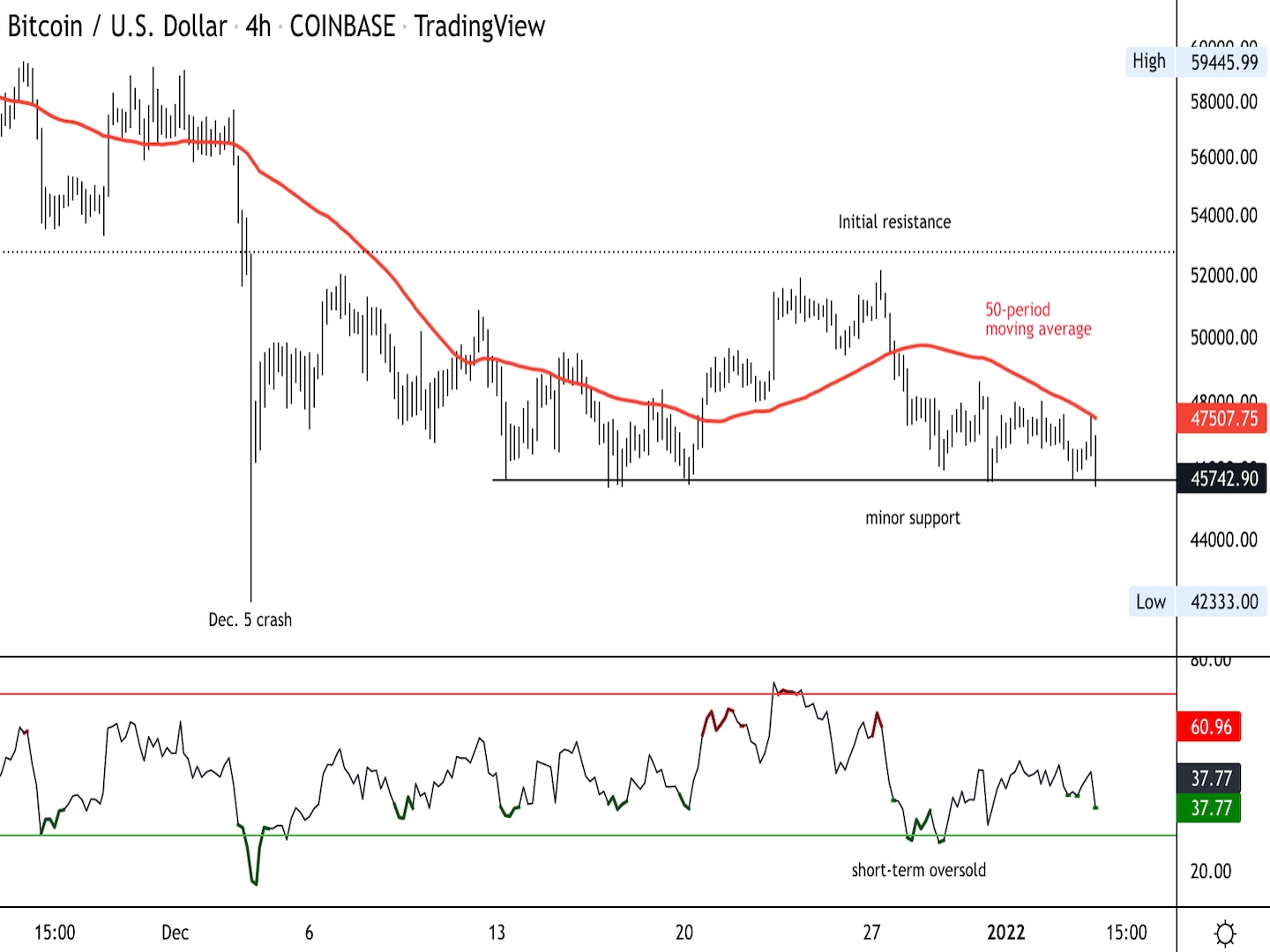 Bitcoin (BTC) was declining toward the $44,000-$45,000 support zone at the time of writing and is roughly flat over the past 24 hours. Indicators suggest a possible price bounce, albeit limited toward the $55,000 resistance level.

BTC has been stuck in a month-long trading range after a near 20% crash in early December discouraged some buyers. Since then, the relative strength index (RSI) signaled a few oversold readings, although price gains have been muted compared to prior signals.

A daily price close above $46,334 (at 8 p.m. ET) would confirm a positive signal, which would increase the possibility of a rise toward $55,644, according to Stockton.

In case you missed it, here are the most recent episodes of First Mover on CoinDesk TV:

Breaking Down Web 3., The Near Foundation, Kavita Gupta’s New Fund

First Mover dove into Web 3, what it means to different blockchain leaders, and do their plans include Ethereum? Joining the show to discuss this major theme of 2022 were the Near Foundation’s new CEO, Marieke Flament, and Kavita Gupta, founder of the new Delta Blockchain Fund. Also, Ronnie Moas of Standpoint Research shared his crypto markets analysis.

Today’s crypto explainer: How to Invest in the Metaverse