Bitcoin moved little over the weekend with light trading volume, as the majority of the markets in Asia head to the weeklong Lunar New Year holiday.

Data compiled by CoinDesk shows that bitcoin’s trading volume across major crypto exchanges sank significantly over the weekend compared with the past week. 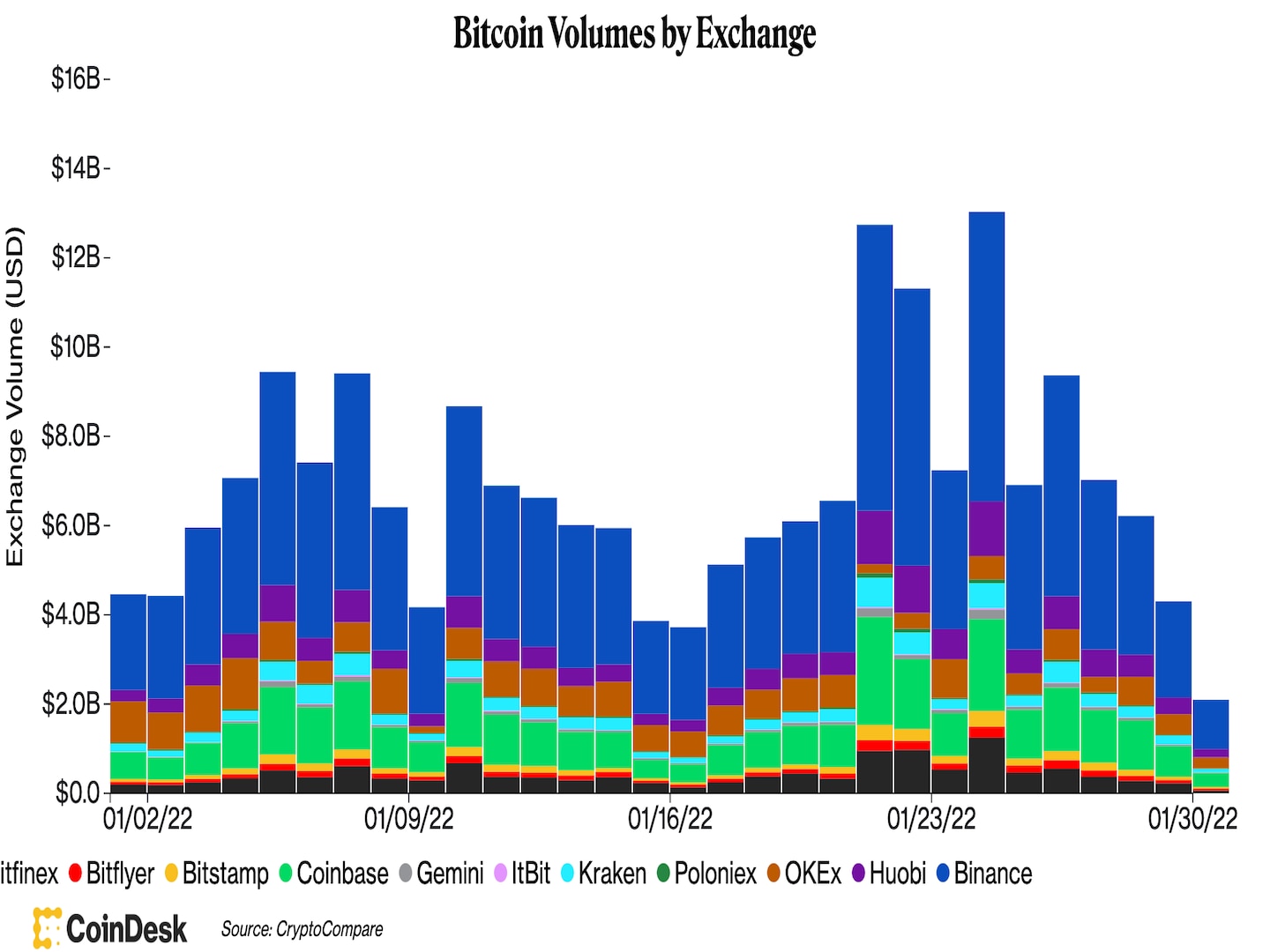 The lunar New Year, also known as Chinese New Year or Spring Festival, is the new year based on the traditional lunisolar calendar of China. It is celebrated by many countries in Asia and the celebration usually lasts for weeks. Major stock indexes in China, Hong Kong, South Korea and Singapore are closed for the Lunar New Year holiday, as most traders take the time off for family reunions.

While the crypto market is 24/7, trading activities in Asia may see some reduction in the coming week due to the holidays. 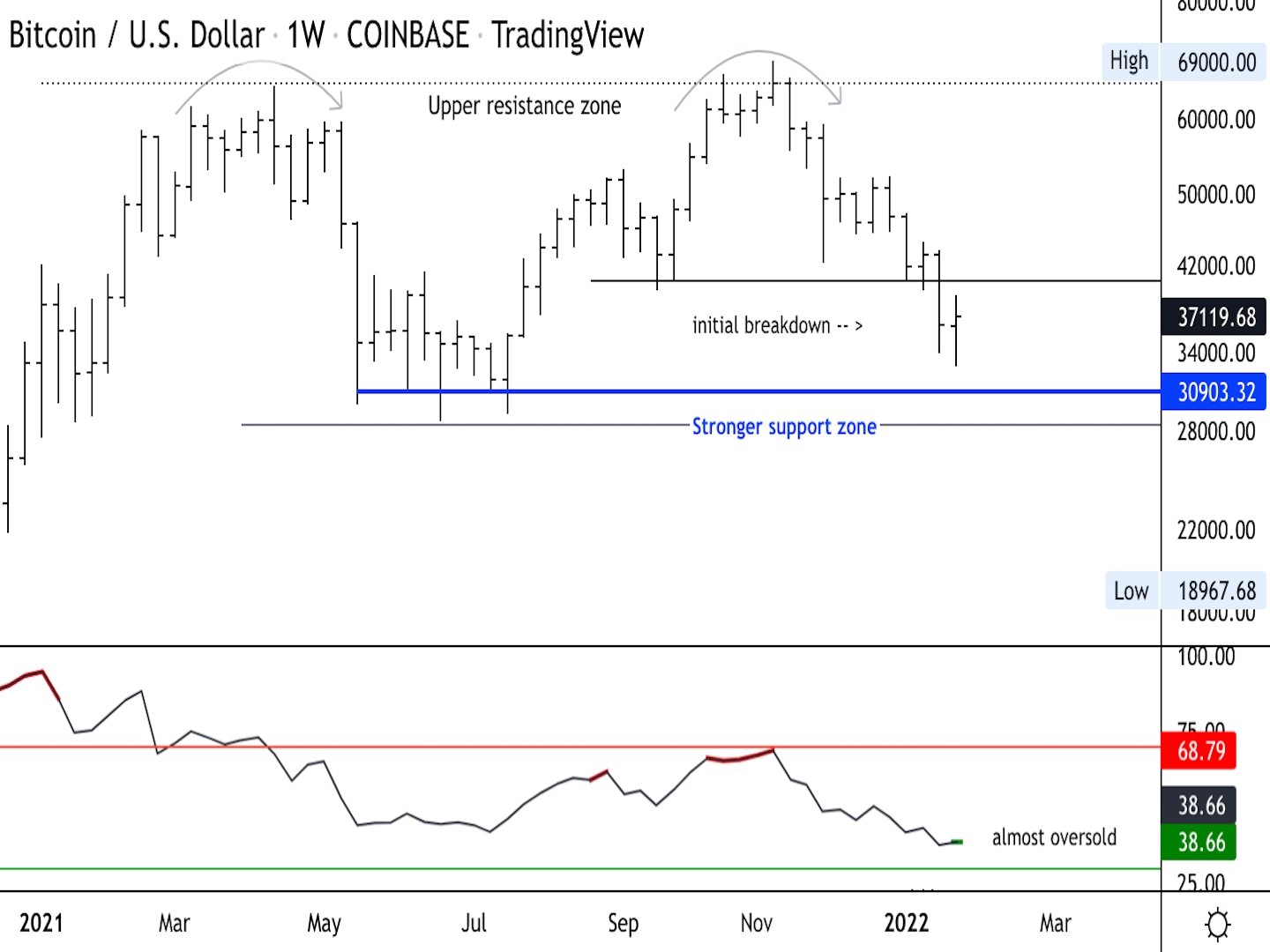 Bitcoin (BTC) buyers have maintained support at the Jan. 24 low of $32,900, and then held above $35,000 over the past few days. Short-term momentum is improving on intraday charts, which could keep buyers active.

Still, longer-term indicators are neutral/bearish, which could limit upside at the $40,000-$43,000 resistance zone.

For now, the relative strength index (RSI) on the weekly chart is approaching oversold levels, similar to what occurred in March 2020, which preceded a price rally. This time, however, the monthly chart indicates strong selling pressure that could maintain BTC’s intermediate-term downtrend.

On the daily chart, the RSI has risen from oversold levels since Jan. 22, which could attract short-term buyers.

For confirmation, traders could monitor the Nasdaq 100 Index of stocks, which has short-term support at $14,000. An oversold bounce in traditional markets could be a near-term positive for crypto prices as correlations rise.

In case you missed it, here is the most recent episode of “First Mover” on CoinDesk TV:

“First Mover” hosts spoke with crypto custody firm Fireblocks CEO Michael Shaulov and FTX.US President Brett Harrison as both companies have attained $8 billion valuations after their respective funding rounds recently. Plus, CoinDesk concluded its Privacy Week with crypto OG and Electronic Coin Company CEO Zooko Wilcox sharing his insights into the state of privacy in crypto as the industry continues to expand.

Buterin to Use Returned $100M From SHIB Donation for COVID Projects Worldwide: CryptoRelief, the Indian COVID-19 fund that received the original donation, is returning the sum, which Buterin will use for higher-risk higher-reward projects.

The Unhosted Crypto Wallet Rule Is Back: The rule was first proposed by a U.S. money-laundering watchdog FinCEN in late 2020.

Alts Have Been Underperforming Expectations … For Now: Many cryptocurrencies underperformed bitcoin but some investors aren’t disheartened. (Opinion)

Google Cloud Hiring Team of Blockchain Experts: The cloud giant is looking at services it can offer directly to blockchain developers.

ChainLink Capital Targets $100M in Assets for 2 Crypto Funds: The fund of funds firm wants to raise $100 million each for its Ama and Luna funds this year.

Crypto Has Parallels With Subprime Mortgage Crisis, Says Paul Krugman: The economist sees evidence that the risks of crypto are falling on those who do not know what they’re getting into and are less able to handle the downsides.

6 Reasons for Optimism This Crypto Winter: Why this downturn is different from 2018.

Other voices: The Rise of the Crypto Mayors

“And if you ask me, regulators have made the same mistake they made on subprime: They failed to protect the public against financial products nobody understood, and many vulnerable families may end up paying the price.” (The New York Times columnist Paul Krugman) … “The question of whether it’s been a success for its investors is probably less important, for the health of the space, than whether it’s been a success for the creators it purports to serve. Events this week have precipitated something of an identity crisis: Does OpenSea want to be a marketplace, a hub for artists or an unregulated casino?” (CoinDesk columnist Will Gottsegen) … “And there are broader positive lessons to be learned – above all, that wealthy and influential people still have to exhibit at least a shred of competence to get what they want. The Libra effort was a shambolic mess from the jump, with Facebook showing again and again that it hadn’t thought through the implications of either its overall goal or its specific proposals.” (CoinDesk columnist David Z. Morris) …”What we find is that most of these cryptocurrencies – save algorand, cardano and dogecoin – woefully underperformed bitcoin and what they were expected to do during such a downturn.” (CoinDesk columnist Lawrence Lewitinn) … If governments ever wanted to engage in an aggressive program of spending, now is the time. This is a perfect time to issue bonds as long as possible and proceed with long-term investment plans – and as long as the rate of return on those plans is in excess of the funding costs, they pay for themselves. (Padhraic Garvey, head of research at ING bank to The New York Times) … “One of the greatest strategies of all time is to simply hang around. When things are not going your way, just hang around. Don’t go away. Things change.” (Analytics-based tennis coach Craig O’Shannessy on Rafa Nadal)