Juan Tirado, 32, is unemployed and lives with his family at his in-laws’ small home in Maturin, the capital of Monagas state in Venezuela. He earns his living by playing the cryptocurrency-powered video game Axie Infinity every day from his mobile phone.

Being able to play Axie has helped me pay off years of debts and cover not only my own food expenses, but for my daughter, too, Tirado said in an interview in Spanish via Discord.

Venezuela is in its seventh year of recession, with a minimum wage around $2.40 a month and the highest inflation rate in the world. That’s why locals like Tirado are forced to look for alternate ways to feed their families and pay the bills.

That also explains why Axie, a metaverse play-to-earn, animated-pet-training video game inspired by Pokemon but fueled by cryptocurrency rewards, has surged in popularity over the past year in the South American country.

The game’s capacity to generate earnings for individual users has drawn headlines for its widespread adoption in the Philippines, where some of the world’s poorest people have found a supplemental or primary source of income from their daily playing. Authorities there have even discussed taxing players, thanks to the game’s popularity.

So the surging adoption of this game by Venezuelans might show how readily these crypto-powered games could find fresh audiences among populations racked by soaring inflation, shrinking economies and the daily struggle to make ends meet.

According to traffic-monitoring data from SimilarWeb, the second-highest number of Axie players in the world are in Venezuela, after the Philippines but ahead of the United States, Argentina and Brazil. Axie has about 2.5 million daily players around the world, according to officials at Sky Mavis, the owner of Axe Infinity.

Axie Infinity is popular in Venezuela because its similarity to Pokemon is familiar to millennials, said Angelica Valle, ecosystem lead in Mexico for Celo, a platform that makes decentralized financial applications accessible on mobile phones. Valle hasn’t worked with Axie in Venezuela but she’s familiar with it because she works on initiatives to help Latin Americans adopt cryptocurrencies without government intervention.

Venezuelans don’t think about it in terms of crypto, Valle told CoinDesk in an interview. They think this is a game and see it as a means to earn money.

Given the complicated economic situation in Venezuela, Axie Infinity’s method of letting people earn money by playing offers an attractive alternative to citizens to signing on to low-wage jobs to overcome the nation’s hyperinflation.

Venezuela has the highest annual inflation rate of any country, according to the World Bank. The inflation rate decreased to 1,575% in October from 1,946% in September, according to data from TradingEconomics. It makes the latest 6.2% inflation reading in the U.S. – with the fastest growth in three decades – look tame.

Axie empowers Venezuelans to make money in crypto rather than their broken currency, said Carlos Betancourt, founder of BKCoin Capital, in an interview with CoinDesk. 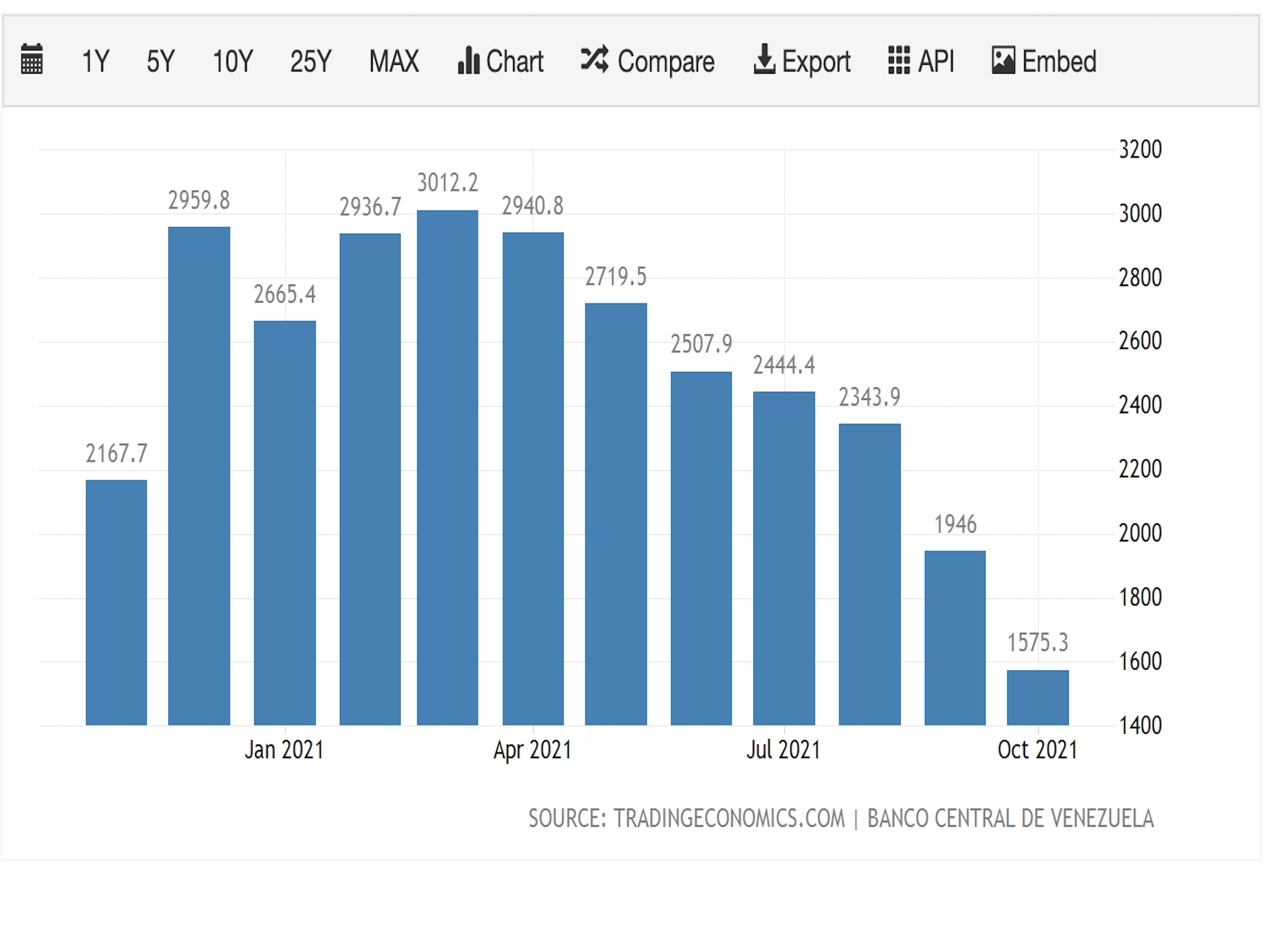 In Venezuela, where the minimum monthly wage is so low, the initial price to play Axie is high.

To get started, Axie Infinity requires users to buy (or borrow) three Axies. Currently, the average price per Axie is around $355, according to DappRadar. At that price, starting the game costs around $1,065 to form a team of three players.

For this reason, the Axie community has created scholarships – not in the traditional sense of educational grants, but a way of staking players who don’t immediately have the cash for the startup costs. Through these scholarships, Axie owners lend their Axies for a cut of the tokens earned.

To apply for a scholarship, people join Axie scholarship-related Discord or Telegram groups, where users publicize when they have openings. Others go directly to websites such as Axie University 101.

In future a lot more Latin Americans will be playing Axie as its popularity spreads beyond those on scholarships or those who are interested in gaming, Celo’s Valle predicts.

It’s a bold prediction, but plenty of actors are working to make it happen.

Block Esports, a startup based in Venezuela that claims to be the first Spanish-speaking Axie Infinity team in LatAm, lends its Axie teams out through a scholarship process. Depending on the player’s ability, Block Esports offers a 60%-70% cut to the players. Put another way, Block Esports takes a cut from players’ earnings in exchange for loaning their teams to players based on their performance in the game.

Axie Infinity has two utility tokens, smooth love potions (SLP) and Axie Infinity shards (AXS), which can be converted into cash. Most players earn by farming SLP, which are required to breed new Axies.

Some of our players use their Axie earnings to put food on the table, said BlockEsports founder Luis Lozada in an interview with CoinDesk. Others use it to pay for tuition fees. Binance in the game

Tirado plays Axie Infinity through a scholarship from Block Esports. He discovered it by joining the startup’s Discord group. The startup eventually reached out to Tirado with an offer to play.

He uses the money he makes from playing Axie to meet medical expenses for himself, his wife and his daughter, he said. In the past, he has struggled to cover those costs.

I earn the same wage and sometimes more from playing Axie as others I know do by being a lawyer, doctor or engineer, said Tirado. He acknowledges that he finds it very stressful playing Axie. Just like a lot of jobs.

Personally I have many sources of stress. It is not just this game. I must learn to cope, said Tirado. I must learn in order to be able to play well, but also to stop it from affecting my daily life.

Binance, the world’s largest crypto exchange, tweeted on Sept. 6 on its Binance Spanish account that it would offer scholarships for Axie players. Binance’s model allows users to be the total owner of Axies and profits, whereas most scholarship providers only loan users a team to play.

Axie in the developing world

According to Axie co-founder Aleksander Larsen, some 50% of users worldwide have never used crypto before and 25% have never had a bank account.

The [coronavirus] pandemic definitely played a role in the surge of Axie Infinity’s adoption in certain countries, as people looked for alternative ways to make money during a time of financial hardships, Larsen said in an interview with CoinDesk.

During Token2049 in London, one of the largest annual digital asset events, Larson said he’d like to implement an education system on how to play the game for unbanked people across the world, and teach them how blockchains and private keys work.

Whether Axie infinity will reach a wider audience in developing countries remains an open question. Given that users must have a mobile phone or computer access, an established Axie team or a scholarship opportunity, it could be unlikely.

Betancourt, founder of BKCoin Capital, a digital-asset hedge fund, is optimistic. He said the play-to-earn game will spread and offer economic freedom to Venezuelans.

Betancourt is a Venezuelan who lives in New York City. He said he is interested in helping people in Venezuela make a living, arguing that they’ve been suffering due to the current regime’s economic policies. He thinks people will be helped even more through crypto gaming because it will force younger people to educate themselves about the new digital financial world.

Even Venezuelans from the lowest socioeconomic backgrounds will figure out a way to make it happen. Just wait, said Betancourt.

Betancourt uses the example of a 17-year-old Venezuelan he knows named Sebastian. The teenager plays Axie Infinity through a scholarship program. He keeps 70% of his earnings and the rest goes to his scholarship manager.

Play-to-earn games can be high-risk because of price volatility. SLP can be used to breed new Axies but SLP also has its own secondary market. So gamers’ earnings potential could take a hit.

SLP’s price reached an all-time high of about 40 cents in July and has since dropped by 83% to about 7 cents, according to CoinGecko.

However, many Venezuelans may see that volatility as minimal because they face risks that are far greater in their daily lives, according to Betancourt.

The risk is falling deeper in the hands of an economy that’s been beaten up purposely by the regime, which clearly shows no sign of improvement, he said. This game will likely allow some folks to be able to put food on their table.

Besides the Philippines and Venezuela, Axie Infinity has become a significant source of income for people in other developing nations, including Brazil and Vietnam.

Larsen, the Axie co-founder, said the game’s early community was mostly players in the Western world with knowledge of crypto. The game has since been spreading to the developing world, said Larsen.

That Axie Infinity has amassed 2.8 million players around the world shows how quickly monetary rewards in the form of cryptocurrencies could reshape the gaming industry.

The explosive growth is a testament to the fact that a 100% player-owned, real-money economy is the way forward for the games industry, said Larsen.